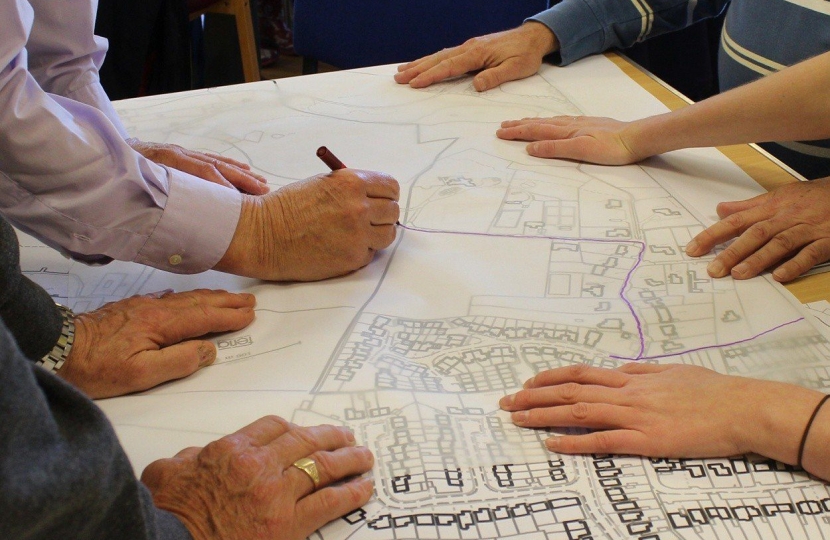 Below, published in full, is a letter sent by Jeremy Wright to Stratford-on-Avon District Council Chief Executive Paul Lankester on March 11th, 2014, in response to the latest consultation on the Core Strategy.

I write in response to the above consultation. As Member of Parliament for Kenilworth and Southam, three of the Council’s five identified strategic options are either located in or will have a direct bearing on my constituency. The proposed sites in respect of Option B (Gaydon/Lighthorne Heath) and Option E (North of Southam and Stoneythorpe) lie within the constituency and proposals associated with Option A (Further Dispersal) will also potentially affect a number of locations within its borders. I will restrict the focus of my comments to these three options.

Increase in the housing requirement

While it is unfortunate that it has been necessary to incrementally increase the housing requirement at each stage of consultation on the Core Strategy, I recognise the importance of the submitted requirement being credible and based on the most accurate data available for the purposes of examination. The revised figure of 10,800 dwellings, when taking account of the most recent data and the change in the plan period, appears to be realistic.

As I stated in my response to the New Proposals Consultation of August/September 2013, I feel that it is important that where a housing requirement is revised (particularly where it is revised upwards) that a full explanation of the need to do so is provided. I am pleased that in this instance the Council has taken time in the consultation document to explain the new factors that are in play and to give details of the assumptions that are drawn to come to a revised figure. It can be hoped with this clarity of exposition that the examining inspectors will come to the same conclusion in their analysis.

As a matter of overall strategy, I feel it would be unwise for the Council, having already changed its approach away from a policy of dispersal in favour of a new settlement option in 2013, to change its approach once again and revert to dispersal as a means of fulfilling the remaining ‘to-find’ figure. As the housing requirement increases, identifying the necessary sites becomes an increasingly complex task. Additionally, as the consultation paper notes, a dispersal approach is reliant on existing local services and amenities absorbing the increase in population. It could also have a deleterious effect on the character and setting of a number of historic towns and villages.

These points are echoed in the Sustainability Appraisal, which also underlines the level of uncertainty that exists in determining the impact of Option A. Without firmer proposals being brought forward, sustainability can only be assessed with great difficulty. This option seemingly begs more questions than it answers, and will do little to speed the progress of the Core Strategy.

The consultation paper does go on to suggest a number of Main Rural Centres and Local Service Villages in my constituency which may contribute to a dispersed approach. A number of the former are larger settlements that have already seen a considerable expansion of housing in recent years. The 74% increase in dwellings in Wellesbourne between 1981 and 2011 is referenced earlier in the paper. Several of the latter Local Service Villages, such as Long Itchington and Stockton, have also faced or are currently in the process of facing applications for residential development. These are being resisted for the very reasons identified in the paper and Sustainability Appraisal – the negative effect on local services and on the rural character of the villages. The sustainability of such proposals can therefore be seriously questioned and their inclusion is likely to be met with the strongest local resistance.

My observations on a new settlement at Gaydon/Lighthorne Heath made up the substance of my response to the New Proposals Consultation in September 2013. I continue to associate myself with these remarks and many of those points continue to apply to the current proposals.

i) The proposed site is in an area of greenfield rural land, which, as the Sustainability Assessment acknowledges, incorporates areas of high biodiversity value and a number of sites of significance to the natural and heritage environment.  The retention of the rural character of the area is of considerable importance to my constituents and the impact of a large settlement would be significant and irreversible. Any further deliberation would require the most careful consideration of the design of the settlement and substantial proposals for mitigation would be necessary if this option is to be further explored.

ii) The effect of development on listed buildings in the area, such as Chesterton Windmill, and on the ancient woodland in Chesterton Wood are matters of particular concern. The lack of detail on potential mitigation makes it difficult to assess what the impact on the heritage environment would be. The Local Wildlife Sites at Gaydon Coppice and Lighthorne Quarry would be substantially affected. It is clear from the Sustainability Assessment that the lakes to the north of Chesterton Wood have not been fully surveyed and the impact on the high biodiversity in the area is consequently not fully appreciated.

iii) The effect of the proposed site’s proximity to the M40 is only given a passing reference in the consultation document and the Sustainability Assessment. The noise and pollution issues which were raised in the 2013 consultation do not appear to have been fully taken account of in the present consultation. The effect of light and noise pollution from the settlement on nearby habitats should also be considered.

iv) The objectives relating to the impact on both the landscape and countryside point overall to a likely strong adverse effect in the Sustainability Assessment.

i) The Sustainability Assessment again acknowledges the limited nature of local services in the area. The provision of new educational facilities and, in particular, healthcare facilities would be essential in any development. Creating the necessary provision from scratch for the number of new residents that are envisaged where current provision is at near capacity is an ambitious task.

ii) The issue of water and sewage capacity that was raised in the 2013 consultation does not appear to have been considered. The technical reports accompanying the previous consultation suggested that there was minimal extra capacity in the area and that extensive additional capacity would be necessary if a new settlement were sited nearby.

iii) While a wider diversity of employment opportunities is considered in this consultation, I would repeat my concern from 2013 that there is not an over- reliance on individual large scale employers. Constituents are concerned that previous developments which have promised local employment opportunities have had limited impact as the majority of new employees commuted from outside of the immediate area.

i) My comments on the 2013 consultation in respect of road traffic continue to apply to these proposals. The transport assessments conducted as part of the 2013 consultation indicated a number of impacts including increases in delays, queues and journey times. The impact on the current and future expansion of the Jaguar Land Rover plant on local traffic on main roads and the proliferation of ‘rat runs’ on smaller roads needs to be considered.

ii) The consultation paper recognises the impact that a large influx of new residents is likely to have on the roads and the increased hazards that exist unless measures are taken to reduce car use. The local public transport infrastructure is not sufficient to absorb these increases and adequately reduce the hazards that are identified. Mitigation proposals of much greater detail and clarity will need to be brought forward if the acceptability of this site is to be accurately assessed.

A major concern that has been voiced by constituents with respect to this option is the scope that the proposal has for increasing urban sprawl. The proposed site occupies the area between Southam and Long Itchington and residents of the latter are concerned that this would seriously threaten the separate identity of the village. Both Long Itchington and nearby Stockton are currently facing applications for residential development where extension of the settlement boundaries is being vigorously opposed. The prospect of a large new settlement adding to urban sprawl would be likely to encounter similar opposition.

There are several sites of significance to the natural and heritage environment that are mentioned in the Sustainability Assessment, including the listed buildings in the northern part of the site, the Geological site on the southern edge, the Long Itchington and Southam Conservation Areas and the Local Wildlife Sites. Whilst it is right that these are recognised and mitigation proposals are made to accommodate them within the proposals, the number of such sites that will be impacted, combined with an already high level of landscape sensitivity, gives rise to questions over the suitability of this option as a whole.

I am concerned at the statement in the consultation paper that the new settlement of 2,000 homes would have to look to Southam to provide a number of community services and amenities. Southam currently has a population of just over 6,500. The increase in population which the new settlement would bring would therefore be substantial. Earlier in the consultation paper one of the stated advantages of a new settlement over the dispersal approach is the fact it gives greater scope for the creation of additional infrastructure. By contrast, these proposals seem to place much reliance on existing settlements, without the compensating advantages of dispersal.

Other than this, many of the considerations which apply to the Gaydon/Lighthorne Heath proposal in respect of services and amenities apply to this option. Existing services will not be able to absorb the demand from the influx of new residents and investment in new infrastructure will be necessary, particularly where educational and healthcare facilities are concerned.

The Council will be aware of recent representations I have made in respect of planning applications in Long Itchington and how the impact of traffic in the area is a particular concern amongst residents. Traffic congestion is already an issue in the surrounding villages, particularly at peak times. Stockton Road is the main road running through the north of the proposed site and will have to take a significant share of extra traffic. The road is narrow and often obstructed by parked cars. It is also the site of the local primary school. The junctions with both the A423 and the A426 have their own access issues and have been the scene of a number of accidents in recent years. Increases in traffic would only serve to increase these problems.

The Sustainability Appraisal suggests the Stoneythorpe site to be the weakest of the potential options, and the Appraisal and consultation paper point to the site’s unsuitability in a number of areas. The significant environmental impact in an area of high landscape sensitivity is emphasised. Part of the site is considered to be at considerable risk of flooding. The proposed scheme is not well located in relation to existing services and is too small to allow for a full range of services and amenities to be developed. The site is poorly located in relation to existing transport links and again its size makes it unlikely that high quality public transport services will be put in place to serve it.  It is further due to be substantially affected by the construction and operation of the High Speed 2 line.

It is my view that the deficiencies in the North of Southam site together with the numerous problems associated with the Stoneythorpe site make this combined option unsuitable.

The Council will no doubt have received a large number of responses from my constituents which state their individual views directly. I hope that my observations and the views of my constituents who would be most affected by these proposals will be given full consideration when the suitability of these options comes to be determined.