The constituency of Kenilworth and Southam is geographically one of the largest in the West Midlands.

Its largest town is Kenilworth, with a population of around 23,000. The only other town in the constituency is Southam.

While the area might at first glance appear to be a mix of dormitory towns and commuter villages, it is an area of diverse interests and activities. Agriculture is very significant, not only in terms of local farming but also because the constituency is home to the Royal Agricultural Society of England (RASE) at Stoneleigh and the headquarters of the National Farmers Union.

Vital transport links criss-cross the constituency, with the M40 motorway snaking from north to south and the Grand Union Canal crossing from east to west. Baginton airport is in the north of the constituency. The constituency is also home to key research and development sites, in particular Jaguar and LandRover at Gaydon, which is also home to Aston Martin, and Warwick University’s administrative and research facilities north of Kenilworth.

Southam cement works is a landmark which can be seen for miles around, and the area has a rich history, with many historic houses, including four National Trust properties- Baddesley Clinton, Packwood, Upton and Farnborough; the nationally-acclaimed art gallery at Compton Verney, beautiful old churches and pubs and, of course, Kenilworth Castle, all of which make it a popular destination for tourists and day trippers and a desirable area to live. 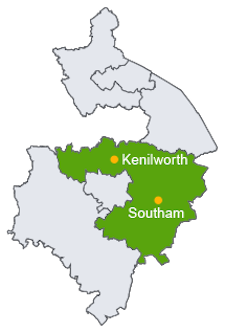