Meeting the Legion in Parliament 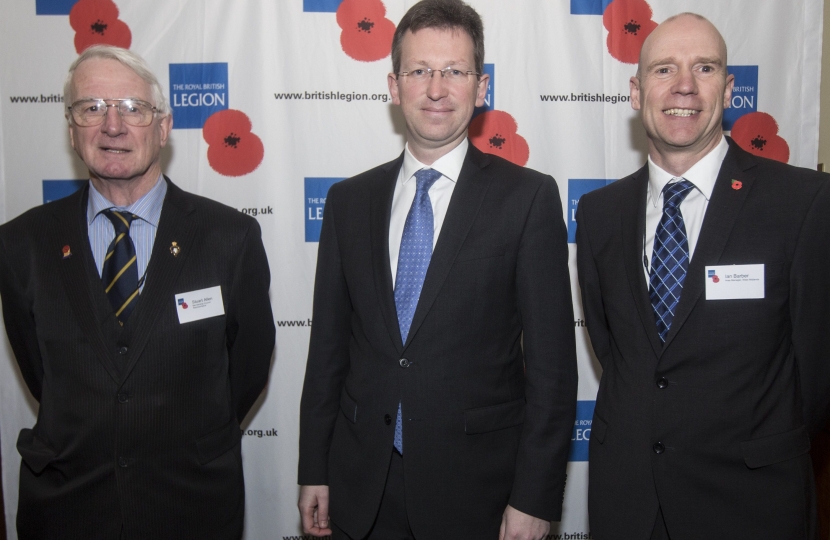 During a typical week in Westminster, I am often asked if I will meet with various charities and organisations who each want to highlight a certain campaign or issue. It isn’t possible for me to meet every request but I will always try if my diary allows. Last week I was able to meet with The Royal British Legion’s local Area Manager Ian Barber to discuss support for the Armed Forces community.

Many will know the Royal British Legion is the country’s largest charity supporting the armed forces, and provides invaluable welfare assistance for many thousands of veterans, serving personnel and their families. The event I attended in Parliament allowed me to show my support for the charity’s work, and to discuss issues currently facing the armed forces community.

Legion research has found that the biggest issues currently experienced by working-age members of the UK’s ex-service community include hearing loss and difficulty finding employment; among over-75s, physical health and care are among the most common problems.

The Legion successfully campaigned for a £10 million hearing loss fund, supports career transition through its Civvy Street website and delivers practical assistance through community outreach services and six care homes, one of which I am proud to say is Galanos House in Southam, who were awarded Care Home of the Year 2015 (by the National Care Awards) for the high standard of care provided and the dedicated dementia care unit I have seen there. A network of 16 high street ‘Pop In’ centres has also been developed to make it easier for those who need it to seek help.

This latest parliamentary event offered a great opportunity for the Legion to update me about the range of services they provide. I enjoyed meeting staff from The Royal British Legion and learning more about the work being done in my local area. Members of the Armed Forces community make huge sacrifices in service of our country and I am proud to support the work of the Legion in honouring the memory of the fallen and building a better future for the living.