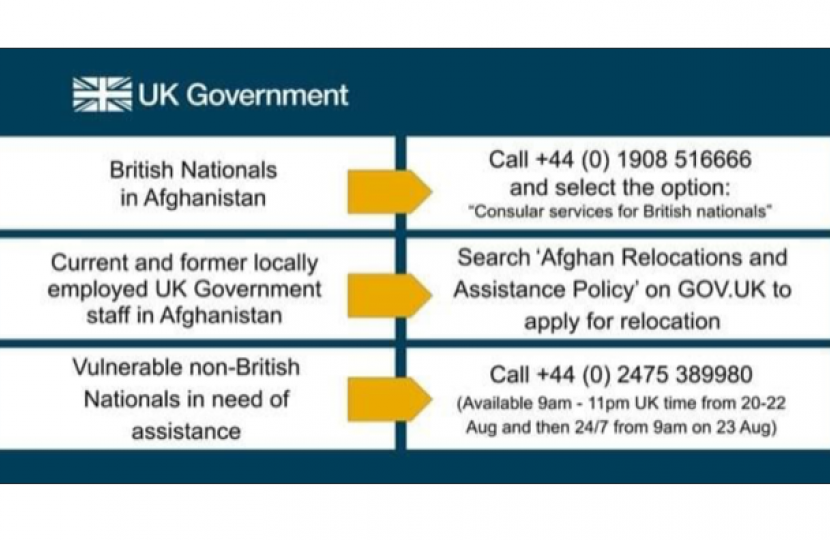 The decision to leave Afghanistan was primarily made by the US President. Realistically the UK could not stay on its own. We now face however a difficult and distressing situation. I attended the debate in the House of Commons last week, where it was made clear that we owe a debt of gratitude to all those who have worked with our country to make Afghanistan a better place over the last twenty years and many of these people, particularly women and children, are now in urgent need of help.

It is therefore encouraging that thousands of Afghan women, children and others most in need will be welcomed to the UK. The new Afghan Citizens’ Resettlement Scheme (ACRS) will be one of the most generous resettlement schemes in the history of the UK. This new route is modelled on the successful Syrian vulnerable persons resettlement scheme, which resettled 20,000 Syrian refugees over a seven-year period from 2014 to 2021.

The new scheme will resettle 5,000 Afghan nationals in its first year with priority given to women and girls and religious and other minorities, who are most at risk of human rights abuses and dehumanising treatment by the Taliban. I understand that this resettlement scheme will be kept under further review for future years, with up to a total of 20,000 in the long-term.

This new scheme is separate from, and in addition to, the Afghan Relocations and Assistance Policy (ARAP), which offers any current or former locally employed staff who are assessed to be under serious threat to life priority relocation to the UK. 5,000 former Afghan staff and their family members are expected to be relocated to the UK by the end of this year under ARAP.

I also believe that international co-operation is essential in this area and therefore welcome the fact that the UK is working with international partners to develop a system to identify those most at risk and resettle them, ensuring help goes to those that need it.

West Midlands Railway (WMR) has confirmed that additional train services will be restored between Nuneaton and Leamington Spa later this month, an increase of approximately 40% on weekdays and more on Saturdays, effective from Monday 27th September.